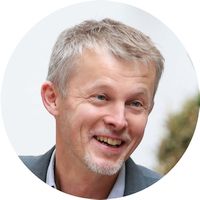 Thrive (and don’t just survive) in a VUCA world

Imagine if the Kodak management could time travel back to the meeting in 1977 where they dismissed the idea of commercializing their patent for a digital camera. With knowledge from today, they would almost certainly take a different decision. How to deal accordingly with this kind of uncertainty in an entrepreneurial way will help you thrive under VUCA.

What happens if people walk into a corporate meeting with an uncertain idea that might have a positive impact on the company’s business? Chances are high that they will be asked to provide a viable business case before they get the »license to act.« But what if you just can’t provide reliable data, because both idea and context are highly uncertain? Most likely, your proposal will be dismissed. As seen in history, basing early stage business decisions on prediction and planning logic can kill a whole company. At the minimum, it is a serious barrier to innovation. What are the options when prediction and planning just do not work yet?

It might make sense to look at the breed, that thrives under uncertainty: expert entrepreneurs. Two decades ago, Professor Saras D. Sarasvathy started to study them through the lens of a cognitive scientist and made a fascinating discovery. Expert entrepreneurs (unlike corporate managers) tend to wave predictive information when making decisions under uncertainty. With gaining experience, they all tend towards a logic of non-predictive control, which Sarasvathy named »Effectuation.«

Today, in times of an ever-increasing level of volatility, uncertainty, complexity and ambiguity, Effectuation as a way of thinking, deciding and acting is becoming highly relevant for companies. It provides a rational remedy for analysis paralysis and makes them capable of acting again, when sit-and-think just does not do the job (see illustration). 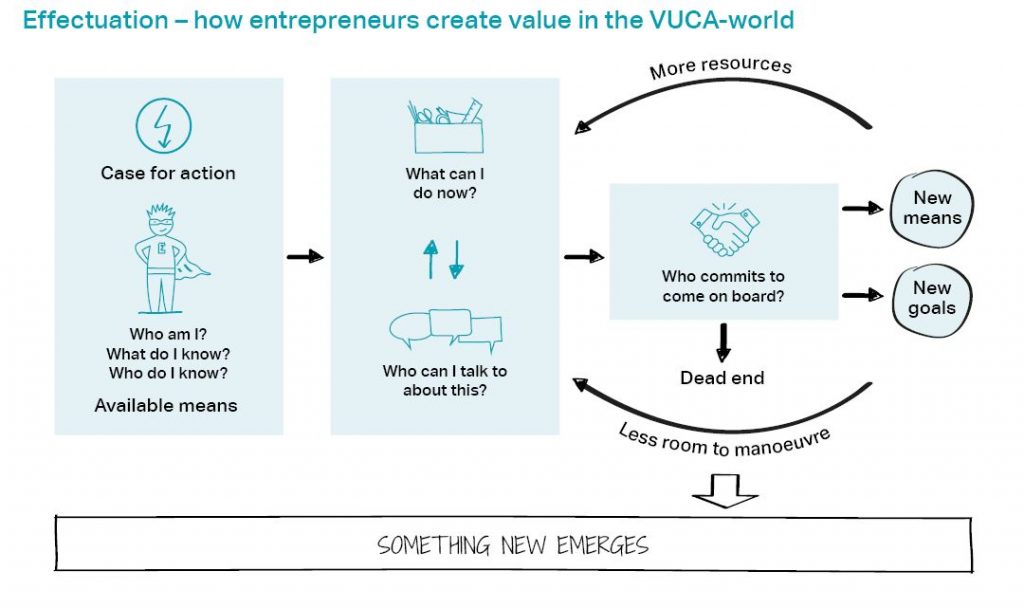 What to do if prediction is impossible?

At its core, Effectuation as the logic of non-predictive control can be described in these four principles:

1. Start with the means at hand
Take action based on what you (personally as well as on the company level) have available (your purpose and preferences, what you know already, and who you know) instead of trying to set SMART targets to reach a predicted optimal position.

2. Think about »affordable loss«
Pursue interesting but uncertain opportunities, despite not being able to predict the expected return. Limit your downside potential, however. Only invest resources up to a level you can afford to lose.

3. Leverage contingencies
Surprises are good in an uncertain context. New developments encourage imaginative re-thinking of possibilities and continual transformation of your preliminary targets.

4. Engage in early partnerships
Don’t try to find the perfect partners – start out with the ones who are available and willing to commit to something early in the process. Strategy is created jointly through partnerships that shape new opportunities where everyone who commits, benefits.

Note that these principles are the exact opposite of what you learned at business school. In the predictive MBA logic, you would start by defining clear targets (instead of starting with available means). You would decide based on expected return (instead of affordable loss), avoiding (instead of embracing) contingencies. And you would seek the perfect (instead of the available) partnerships based on thorough stakeholder analysis. That makes perfect sense, because all of these corporate principles are optimized for an environment where prediction works. But all of them fail in the VUCA context (see also article »Dinosaur Management«).

How companies benefit from Effectuation

The predictive corporate mindset works like a native language: It goes without saying. But in the contexts where uncertainty caused by new technologies, fickle customers, creative competitors and even government regulation is on the rise, thoughtful prediction and planning – the dominant elements in this language – are close to useless. As a cure, Effectuation can be introduced to a company like a foreign language:

That said, you might wonder how to get started. Well, you can learn the basics from books or in the classroom, but in the end you will only learn a language by applying it.

To get a first practical idea as to how to change your company to be bilingual, read the article »The Market of Makers.«

Hard to unlearn: The habit of prediction

Recent scientific experiments at International Institute for Management Development (IMD) in Lausanne show how deeply we have internalized the necessity and benefit of prediction. Experienced managers had to act out a decision-making scenario. The more they were confronted with a volatile and uncertain situation (new or merging competitors, new technologies or changes in the environment), the more they tried to apply predictions, even if it proved useless. Unsure what to do next, they relied even more on their proven recipes than a group of peers who acted out a scenario in a predictable environment.